We hope you enjoy our website and will stop by and visit us if you are in the area. This site is designed to give you information about our facility, our style of martial arts, our staff and provide you with information on how to contact us as well.

Come Grow With Us!

Kenpo is a style of Karate developed in the west. The only difference between Kenpo and Kempo is in the translation of the Kanji to its English form. The words Kenpo and Kempo are both pronounced the same and both mean "Law of the Fist." However, the more "traditional" forms of Kempo use the "Kempo" form, while the more non-traditional modern or contemporary versions use the term "Kenpo." 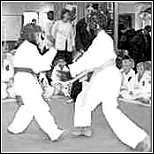 Self-defense techniques help Kenpo students develop their skills by allowing them to practice with different threatening situations and experiment with what-if scenarios. Initially, forms and katas help students to develop mental concentration and mental discipline. As they progress, the forms and katas help them to develop self-awareness and self-expression. Kumite (also known as freestyle or sparring) is an exercise in which students test their skills, self-confidence, and self-control in a friendly competition among other classmates. It gives students the opportunity to develop their reflexes and timing in a controlled environment while engaging in a sport activity.

Kenpo also teaches students how to use weapons to increase their understanding of self-defense. In Kenpo, defense against knives and clubs are taught from the yellow belt and up. Weapon training often begins at the green belt level, although some schools restrict it to those of the black belt level and higher.

The Kenpo style strives to maintain a balance between "martial" and "art." The "martial" aspect is expressed by effective efficient self-defense concepts and techniques. The "art" is expressed by creativity, self-expression, and presentation of form.